Andre Frei is an above-knee amputee and our pilot at the Cybathlon 2020. For several months we have been training together for the competition, exchanging ideas and discussing future adjustments and optimisations of the Circleg prosthetic system.

Andre Frei walks towards us with quick steps, balancing three apples in his hand on a small plate. He crosses a sloping surface, skilfully avoiding the obstacles placed on it in a slalom. Very concentrated he goes to the next obstacle in this empty hall; a staircase over which he has to carry three cardboard boxes and three balls. The stairs can only be used alternately and Andre is not allowed to stand on one step with two legs at the same time. This is specified by the regulations of the Cybathlon, the unique competition in which people with disabilities compete against each other in completing everyday tasks using the most modern technical assistance systems. Project Circleg is one of the participating Swiss teams and Andre Frei is our pilot. For several months we have been training together for the competition, exchanging ideas and discussing future adjustments and optimizations of the Circleg prosthetic system.

In the empty halls of the Rieter company – which has shaped the industrial progress in the spinning industry – a test parcour has been set up where start-ups are now training for Cybathlon with their equally innovative products. At this moment, Andre is wearing our prototype and passes the set-up obstacles with ease that amazes us. Andre is an experienced prosthesis wearer, very fit and extremely motivated to achieve a great result at Cybathlon. His mental strength and his will power are certainly also influenced by his past. When he lost his right leg in a motorcycle accident at the age of 18, he did not let himself be thrown off track. Despite this setback, he continued his bricklayer apprenticeship and completed it successfully. He then finished a second apprenticeship as a banker and currently Andre is studying business information technology at the University of Applied Sciences in St. Gallen.
A remarkable career for his tender 31 years, considering the drastic and life-changing experience of the leg amputation.

We got to know Andre thanks to the orthopaedic technician Peter Berhalter, who was responsible for the adjustment, care and repair of Andre’s prosthesis at Malgaroli & Glauser for several years. Peter gave us an introduction to the art of socket fabrication in the spring of 2019 and during this visit referred us to his young and agile patient. Afterwards, things went quickly: After an initial meeting with a project presentation, Andre stood on our prototype just a few weeks later and gave us valuable feedback for further development. However, Andre is not only a «test runner» of our prototypes, he is also interested in the mechanics and technology behind them and actively participates in the development with ideas.

«I have always examined my prosthesis and thought about how it could be improved.»

«Since I know how important a prosthesis is for my everyday life, I am very pleased to be involved in such a project. I want the project to have a successful future»

It’s nice to see that Andre has supported our vision of «freedom of mobility for everyone» from the beginning. «I think it’s good that Project Circleg is not primarily about selling a product and making money. Rather, the focus is on social and ecological benefits. By developing an inexpensive prosthesis made of recycled plastic, two problems can be addressed at once: On the one hand, to provide people with an inexpensive prosthesis who could not previously afford existing prostheses, and on the other hand, to create something useful from plastic waste without wasting further resources.»

In addition to Andre, Beat Schwarzenbach also supports us with the testing. He has been wearing an above-knee prosthesis for several decades and helps us with many insights from his everyday life. «Both of us can use our everyday experience with the leg prosthesis to provide input and thus advance the development of the Circleg prosthetic system,» says Andre.

Project Circleg very much values their contribution, as the needs of Andre and Beat (the end-users) are a central point of the development phase. With Project Circleg we want to develop a prosthetic system that meets these needs. We, therefore, appreciate it very much to have found in Andre and Beat two such motivated test persons who can provide us with such valuable feedback.

Andre Frei has just completed the Cybathlon test course in the Rieter hall for the second time and mastered the many obstacles with a best time. We are overwhelmed by how skillfully he controls and uses our Circleg prosthesis prototype and how elegantly and easily Andre solves the tasks. If he didn’t wear short pants, it would be hard to guess that Andre is wearing a prosthesis.

We are very happy with the current prototype developments and are extremely pleased to present the Circleg prosthetic system to the public for the first time at the Cybathlon together with Andre.

However, the Cybathlon is certainly not the end of this friendship. We would like Andre to join the Circleg team afterwards; the development will continue and there will always be room for improvement. With this in mind: Hurray for all that is yet to come and thank you very much for your support, dear Andre! 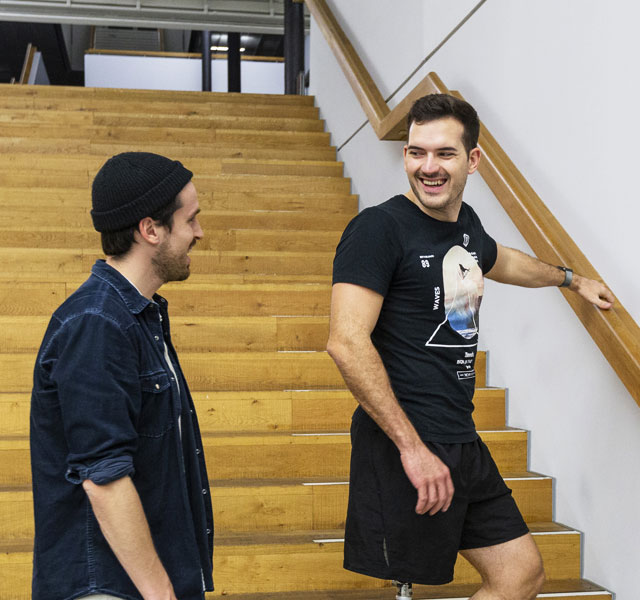 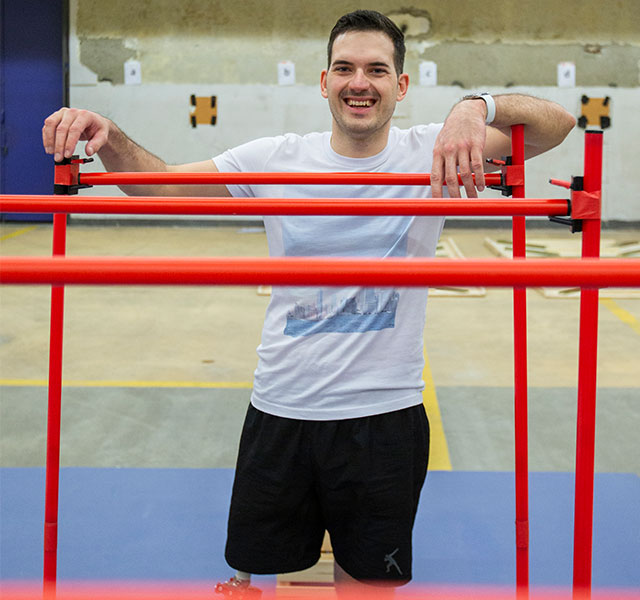